June Unemployment Report for Workers Over 55

Unlike Prior Recoveries, Older Workers Face Wage Stagnation After the Great Recession 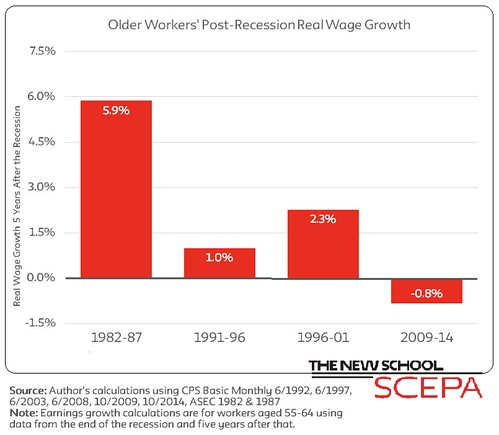 Wage stagnation can indicate a weak labor market and low bargaining power, even when headline unemployment is low. And while it affects all workers in today’s labor market, stagnation especially harms older workers.

The average household approaching retirement has retirement savings of only $150,000. In retirement, this sum will only provide $500 a month in income - far short of what’s needed to maintain retirees’ standard of living. However, near retirees' need to prioritize savings is hamstrung by stagnant wages, forcing them to choose between cutting pre-retirement consumption or arriving at retirement with insufficient savings.