February Unemployment Report for Workers Over 55 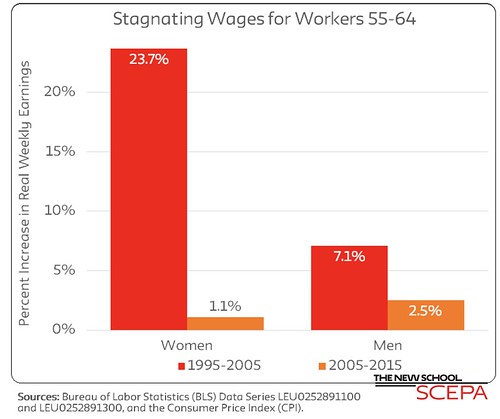 The increase in the labor force participation rate from 2005 to 2015 was associated with a slowing in the rate of growth in wages of older workers, indicative of weak demand for labor. Between 1995 to 2005, real weekly earnings for men and women aged 55 to 64 increased by 7.1% and 23.7%, respectively. But between 2005 to 2015, real weekly earnings increased only 2.5% for men and 1.1% for women. This sluggish rate of growth of weekly wages wasn’t the result of a decline in the number of hours worked. The median hours worked among full-time older workers stayed constant at 40 hours per week between 1995 and 2015.

We need to ensure older workers a viable path to retirement by creating reliable retirement savings programs to supplement Social Security. For example, Guaranteed Retirement Accounts (GRAs) require employee and employer contributions over a worker’s lifetime and provide guaranteed lifetime income in retirement. With the confidence provided by secure retirement income, older workers can choose to leave the labor market according their own needs, rather than hanging on to undesirable jobs out of financial desperation.

Notes: Data for median weekly earnings in current dollars for men and women age 55 to 64 as well as historical and projected labor force participation rates are taken from the Bureau of Labor Statistics. Inflation adjustments are made using the Consumer Price Index. Median usual hours worked per week figures for workers aged 55 to 64 are calculated by the author from CPS Annual Social and Economic Supplement.