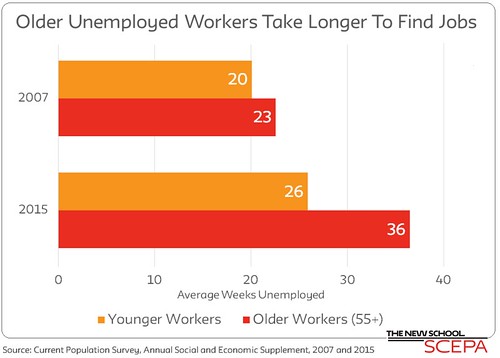 While this is good news overall, if an older worker is out of a job, it will take them 10 weeks longer to find a new one than their younger counterparts. In 2007, the average time spent unemployed for workers 55+ was 23 weeks, compared to 20 weeks for younger workers, a gap of three weeks. In 2015, the gap increased three fold to ten weeks, with older workers spending 36 weeks looking for a job compared to 26 weeks for younger workers.

Whatever the cause, be it age discrimination or biased job training programs, older workers are less able to recover from the shock of losing a job. As their time looking for work stretches out, many turn to early retirement as an escape, paying a high price in decreased standards of living due to inadequate savings. Cutting Social Security benefits by raising the retirement age will fuel the increase in older workers’ income vulnerability. Systemic change requires a comprehensive program in the form of Guaranteed Retirement Accounts to ensure older workers have the retirement income needed to leave the labor market when they chose.