Due to lack of coverage and a systemic reliance on defined contribution plans, workers do not have enough saved for retirement.

Employer-sponsored retirement plans are intended to bridge the gap between Social Security and targeted retirement income. Unfortunately, in 2014, 35% of those nearing retirement did not have access to retirement plan, a share that has increased over the last 30 years. 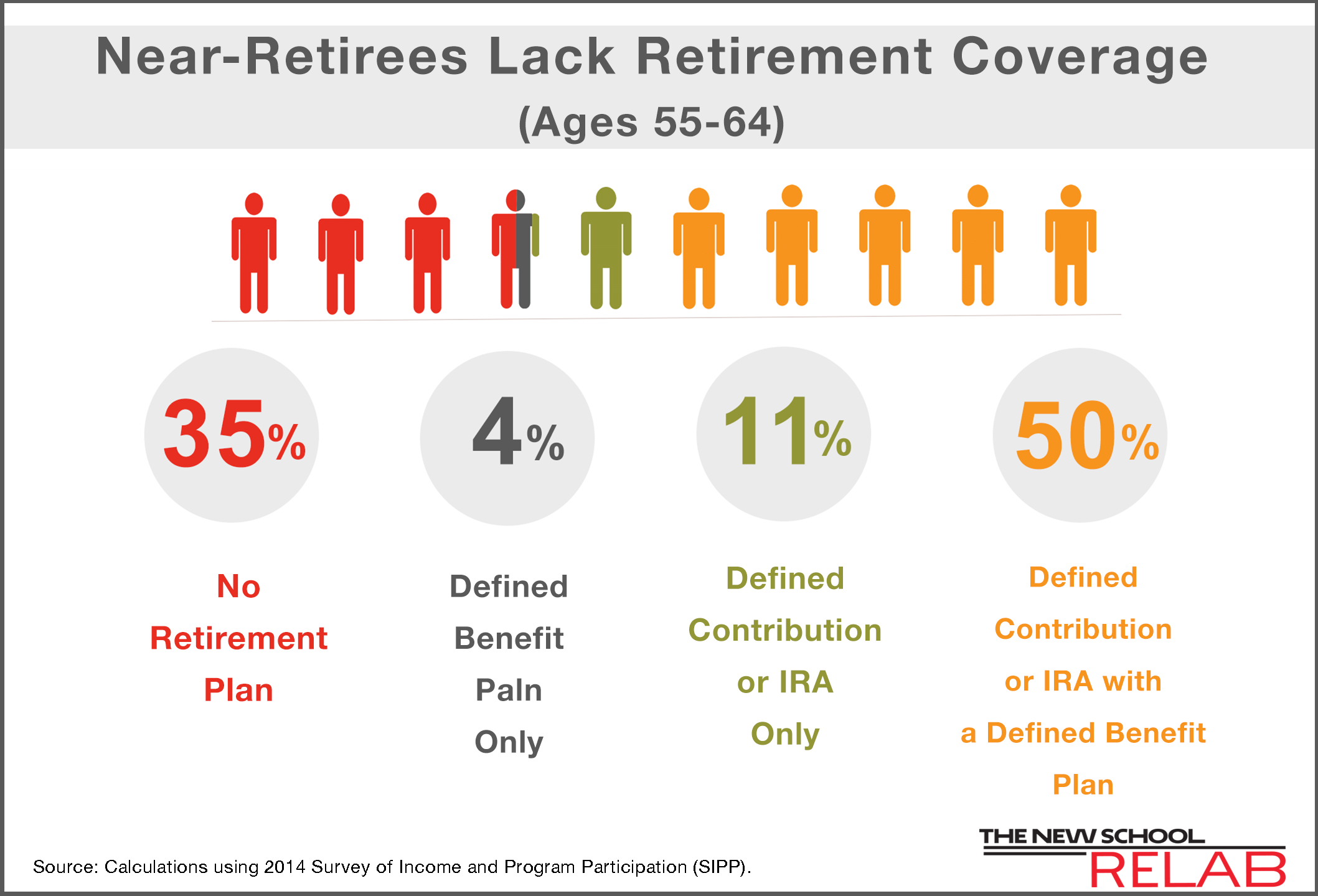 In the 1980’s, 401(k) plans - or defined contribution (DC) plans - became widespread. For most workers in the private sector, they replaced rather than supplemented traditional pension plans, or defined benefit (DB) plans.  In theory, DC plans could enable participants to accumulate adequate wealth by the time they retire. But in practice, account balances fall short, reflecting spotty eligibility histories, non-participation, inadequate contributions and employer matches, pre-retirement withdrawals, high fees, and subpar investment returns. These faults are inherent to the DC system and cannot be fixed by regulation.

These low savings balances will not be enough to allow retirees to maintain their standard of living, a fact that is true at all income levels.

The combined effects of cuts to Social Security benefits and the consequences of a broken DC-centric savings system has created a retirement crisis. Few workers without workplace retirement plans save for retirement. Without significant reform to the retirement system, many workers who reach retirement age will be forced to choose between working longer and suffering severe drops in their living standards in retirement. But many older workers cannot work longer due to physical or mental impairment, and those that are capable of working face a labor market unfriendly to older workers.

Rather than worsening the retirement crisis by cutting Social Security benefits, policymakers should both strengthen Social Security and expand retirement plan coverage. Guaranteed Retirement Accounts (GRAs) are individual accounts requiring employers and employees to contribute with a fair and effective refundable tax credit provided by the government. GRAs provide a safe, effective vehicle for workers to accumulate personal retirement savings over their working lives.

April Unemployment Report for Workers Over 55

Self-Employment Is No Solution for the Older Unemployed

Older workers have lower official unemployment rates than the national average, but face stagnating wages, growing long-term unemployment, physically demanding jobs, and age discrimination. One widely-advocated solution is for the unemployed to create their own jobs by becoming self-employed. 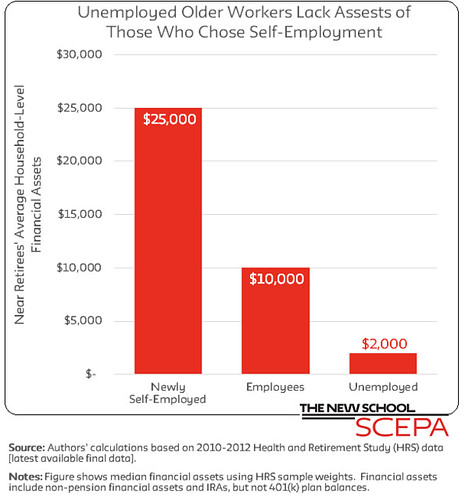 But this is wishful thinking. The existing self-employed are workers who have, to a greater or lesser extent, chosen self-employment rather than entered it as a last resort. It does not follow that if the older unemployed attempt to become self-employed, they will succeed. Analysis of Health and Retirement Study (HRS) data, a nationally representative survey of older Americans shows:

America’s older workers should be able to choose to leave the labor force after a lifetime of work. Policy proposals that call for cutting Social Security benefits by raising the retirement age leave people at the mercy of a labor market unfriendly to older workers. Guaranteed Retirement Accounts (GRAs) open a path to retirement security by providing all workers retirement savings plans with guaranteed growth.

May Unemployment Report for Workers Over 55

Without the Choice to Retire, Unemployment Exacts High Psychological Costs on Older Workers 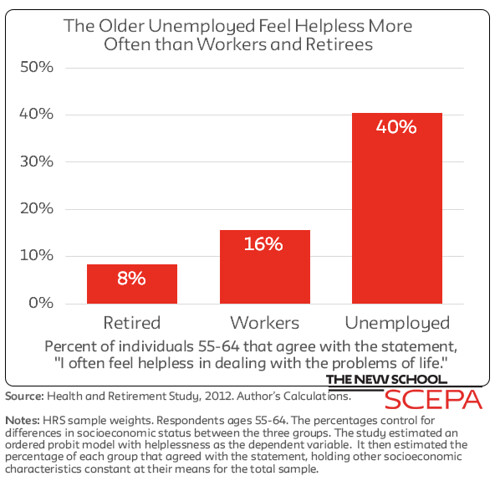 In addition to imposing a financial cost on older workers, unemployment can also impose a psychological cost. The unemployed are not unemployed by choice. And being deprived of choice creates a feeling of helplessness.

According to the Health and Retirement Study (HRS), a nationally representative study of older Americans, unemployed respondents were more likely than both workers and retirees their same age to report a general feeling of helplessness. Among 55 to 64-year-olds, 40% of the unemployed agreed with the statement, “I often feel helpless in dealing with the problems of life,” compared to 8% of retirees and 16% of older workers.

Proposals to cut Social Security benefits by raising the retirement age will condemn some older Americans to unemployment, and will force others to continue to work out of economic necessity. Policymakers should prioritize preserving and strengthening the institutions that give people the choice to retire, rather than chipping away at their foundations. This means expanding Social Security and implementing Guaranteed Retirement Accounts (GRAs) to provide workers with effective savings vehicles over their working lives and lifelong income in retirement.