What Could Possibly Be Wrong With Hudson Yards? 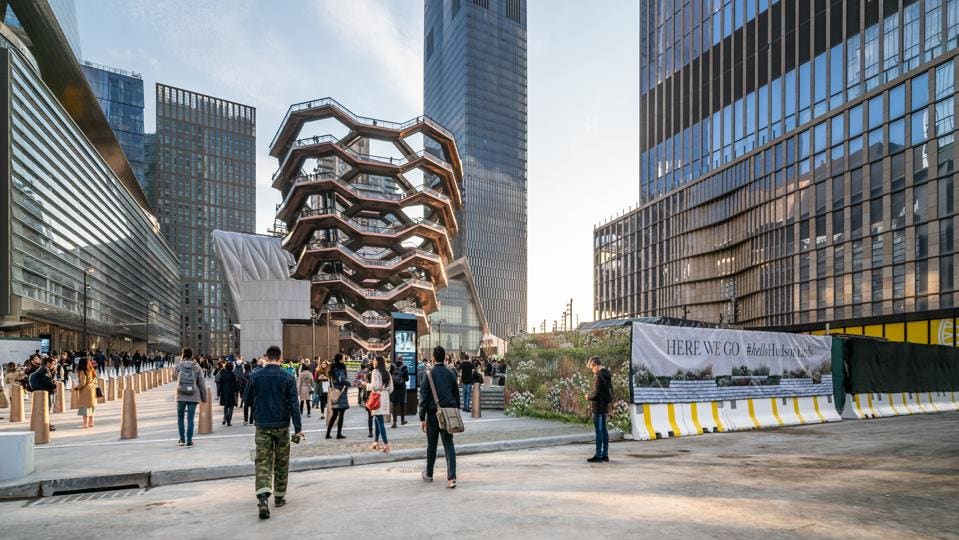 An intriguing bronze-shawarma-Eiffel-Tower-thingy now sits atop the active West Side train yards in Manhattan. The platform has internal air-conditioning to keep the pansy and other plant roots from frying from the hot trains coming in and out of New York from Long Island. Hudson Yards also sports a snazzy theater space called The Shed and an upscale, white marble shopping mall, as well as many condos and offices, all sitting in a space that used to be fetid air. It's amazing, really.

There are a lot of economic and morale-boosting benefits promised by Hudson Yards, which beautified a particularly avoidable part of town. However, where there are benefits, there are costs. And whether a project is worthy is known only when the benefits running on one side of the ledger are compared with the costs along the other side.

How much did New York City pay for Hudson Yards? To answer this thorny question, I asked researchers Bridget Fisher and Flávia Leite (my colleagues at The New School), co-authors of the research report, “The Cost of Hudson Yards Redevelopment Project.”

Tell me about the size of Hudson Yards and how it has transformed Midtown.

In short, Hudson Yards is huge. For most of its recent history, the 360-acre area to the west of Midtown was home to commercial and light industrial uses and 28 acres of open-air rail yards owned by the MTA. In 2005, the city rezoned the area and laid the financial groundwork to transform the low-density manufacturing area into a high-density, mixed-use district.

Today, the area is what New York Magazine calls a “billionaire’s fantasy city” and the New York Times calls a “supersized suburban-style office park.” It is home to super-tall luxury skyscrapers housing office tenants such as Coach and Wells Fargo, a mall housing retail tenants such as Neiman Marcus, Dior and Chanel, and a $475 million city-sponsored arts center. Luxury residential buildings have also grown in the area, with the average apartment costs at $4,300 per month and two-bedroom condos at 35 Hudson Yards starting at $5 million.

It has been said that Hudson Yards is “self-financing?” What is meant by that?

In 2005, Mayor Michael Bloomberg assured city residents that infrastructure needed to attract private development could be built without bearing the costs by using a version of tax increment financing, or “TIF.” Projects using revenue bonds in a TIF-type financing structure are described as “self-financing” based on the theory that designated revenues generated by a development will pay back the costs. However, Hudson Yards shows that the theory often doesn’t reflect the reality when projects are implemented. The city ended up spending an additional $2.2 billion in taxpayer dollars on the Hudson Yards project.

So if Hudson Yards is not “self-financed,” who paid for it?

The choice to use a “self-financing” structure connected the debt issued for the infrastructure costs to the revenues generated by private development in the area. However, the plan for Hudson Yards did not allocate important risks associated with megaprojects, and taxpayers were left footing the bill if and when these materialized—which they did, at a cost of $2.2 billion. This total includes $369 million in debt costs, $400 million in cost overruns and spillovers, and a loss of $1.4 billion in revenue due to tax breaks to commercial and residential developers.

Will Hudson Yards’ shopping, office space and condos actually add more business to the city, as stated by the city and project stakeholders?

It is still too soon to tell. However, the Bloomberg Administration’s central argument for the development of Hudson Yards was the need to build office stock to reverse New York City’s dwindling share of the region’s demand for commercial office space. But so far, we see that rather than bringing in new office businesses from outside the city, 90 percent of Hudson Yards commercial tenants have come from Midtown. More research is necessary to determine the full economic effects.

How will we know if the $2.2 billion in costs to taxpayers are worth the benefits?

Hudson Yards will continue to develop over time. And clearly, at such a size, the project will affect the city’s bottom line. While it is sure to generate revenues for the city, in an age of increasing inequality, we must take full responsibility for how our public dollars are spent, including who benefits, who pays, and what public interest is served. The valuable lesson we can learn from Hudson Yards is to ask these important equity questions before the project is implemented, especially when all New Yorkers bear the costs.