Over Half of Unemployed Older Workers at Risk of Involuntary Retirement

The longer the economy takes to recover, the more likely it is older workers will give up actively looking for work. As the recession continues, some workers may re-enter and leave the labor market. However, there is wide consensus among economists that we will not return to pre-recession levels of employment and output in the next year.2

Between March and June of 2020, 38% of unemployed older Americans gave up looking for work and left the labor force. If the rate of labor force exits continues over the next three months, we expect an additional 1.1 million older workers to leave the labor force, adding to the 2.9 million who already left. A total of 4.0 million people potentially pushed into retirement before they are ready can increase old-age poverty and decrease purchasing power, which can exacerbate an already sharp recession.3

Older Workers Who Left the Workforce Are Unlikely to Return

Under normal economic conditions, older workers who leave the labor force due to layoff are unlikely to re-enter the job market and face having to retire earlier than planned. For example, ReLab found that between 2008 and 2014, at least 52% of retirees over 55 left their last job involuntarily, the result of job loss or a deterioration in health.4 Additionally, older workers who lose their job take nearly twice as long to find a new job compared to young workers.5 Even if jobless older workers find a new job, they can expect their new wages to be 23-41% less than their previous earnings.6

Health risks are likely discouraging many older workers from looking for work. The risks associated with COVID-19 infection increase with age, and the Centers for Disease Control and Prevention report that over 90% of hospitalizations and deaths due to COVID-19 come from people ages 50 and older.7 Some older workers who lost their jobs may have decided to stay out of the labor force to lower their risk of infection. However, given the difficulty older jobseekers face and the expectations of a deep and persistent recession, many who give up looking for work are likely to get pushed into retirement earlier than planned.

Occupations hardest hit by shutdown orders, including manufacturing and low-paying service jobs (in entertainment and food services), employ a greater share of older nonwhite and female workers. Meanwhile high-paying service jobs that disproportionately employ older white men (finance and utilities) did not shut down because they are more amenable to working from home.8

The racial wealth gap and labor market stratification between Blacks and whites means workers of color are likely to have smaller or no retirement accounts.10 As such, people of color are at greater risk of poverty in retirement in general, but more so when they are forced to retire involuntarily. 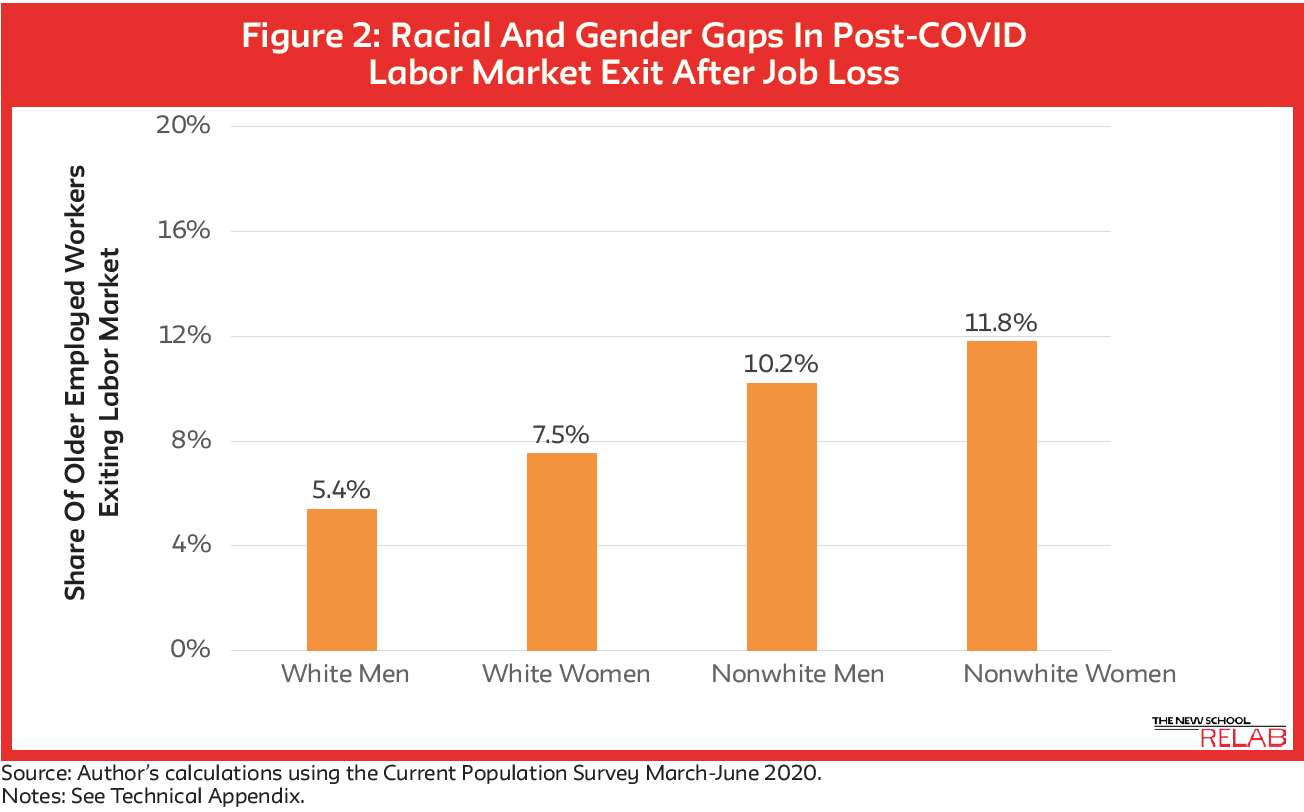 People who retire earlier than planned often claim Social Security benefits earlier, leaving them with lower monthly benefits for the rest of their life. They are also likely to have to begin drawing down their retirement assets in years when workers are often advised to, and plan on, maximizing their savings toward 401(k)s and IRAs. Finally, unplanned retirements mean assets must last more years than originally planned, increasing the risk of outliving one’s assets. All three factors put involuntary retirees at risk of poverty in retirement.

Older workers who are laid off experience longer spells of unemployment, which contributes to why many give up looking for work and retire earlier than planned. Increased unemployment benefits—even more than the $600 a week which expired July 31—can help older workers by allowing them to preserve retirement assets and put off claiming Social Security early, protecting their monthly benefits from the early retirement penalty. Moreover, Congress should suspend the job search requirement for older workers and their caretakers to be eligible for unemployment benefits.11 Older workers should not be forced to look for work at a time when work puts them at risk of severe illness or death.

Congress should reinstate the 10% penalty fee for early withdrawals from tax-advantaged retirement accounts removed by recent passage of the CARES Act. A May survey showed 3 in 10 workers have withdrawn from their retirement accounts to make ends meet during the pandemic.12 Removing the fee encourages individuals to sacrifice their future needs for short-term spending. Rather, Congress should enact measures to ensure the income needs and health insurance needs of those who lost jobs in the COVID-19 recession.

Increasing Social Security and instituting a minimum benefit will soften the blow for workers who are forced to retire before they are ready and prevent many from falling into poverty. Congress should expand Social Security benefits by $200 per month and increase the Special Minimum Benefit up to 125% of poverty.14

An Older Workers Bureau at the U.S. Department of Labor would formulate standards and policies to promote the welfare of older workers, improve their working conditions, and advance their opportunities for profitable employment.

The Bureau would be tasked with three goals. First, provide resources to identify, research and analyze topics of concern for older workers. Second, create innovative policies to advance quality employment opportunities for this increasingly vulnerable population. Last, the bureau would be responsible for outreach and education. This would include efforts to share and promote policies identified and created by the bureau, but also to raise awareness of the economic and societal benefits of promoting quality work for older workers.

The headline unemployment rate (U-3) for workers ages 55 and older was 9.7% in June. While this is lower than the 13.6% rate reported in April, the unemployment rate remains 2.6 percentage points higher than the worst point of the Great Recession. ReLab’s U-7 figure includes everyone in headline unemployment, plus marginally attached and discouraged workers, involuntary part-time workers, and the involuntarily retired (those who say they want a job but have not looked for over a year). U-7 decreased from a high of 16.9% to 14.0%, a smaller decrease than in the headline unemployment rate. The widening gap between U-7 and U-3 reflects more older workers being discouraged by the state of the job market and choosing to not look for work, which, as discussed above, puts them at risk of an early, unplanned retirement. 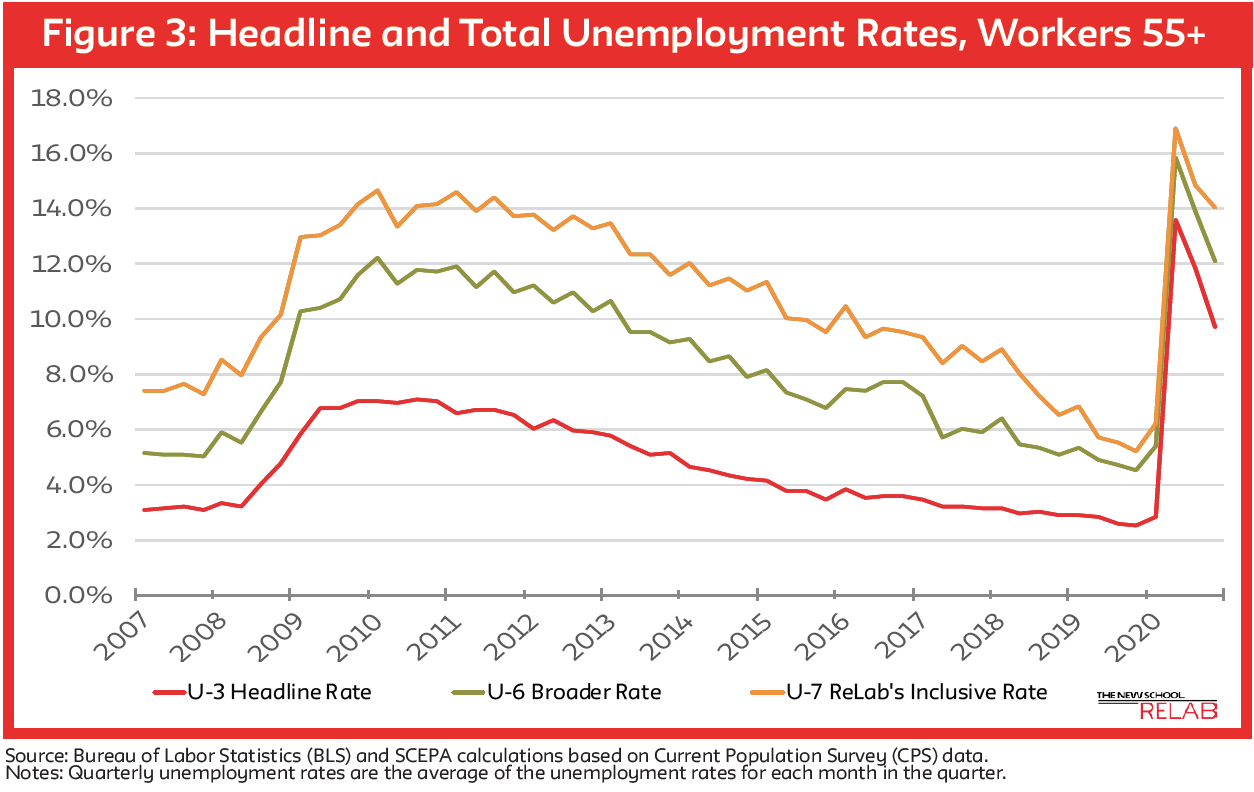 When considering a rate which includes people who should be counted as unemployed but are not, ReLab’s inclusive unemployment rate, we call “U-7,” which includes discouraged and marginally attached workers, involuntary part-time workers, and the involuntarily retired, racial unemployment gaps are even larger. The U-7 rate for white older wokers was 11.4% in June, compared to 16.1% for Black older workers, 16.4% for Hispanic olders workers, and 22.6% for Asian older workers. 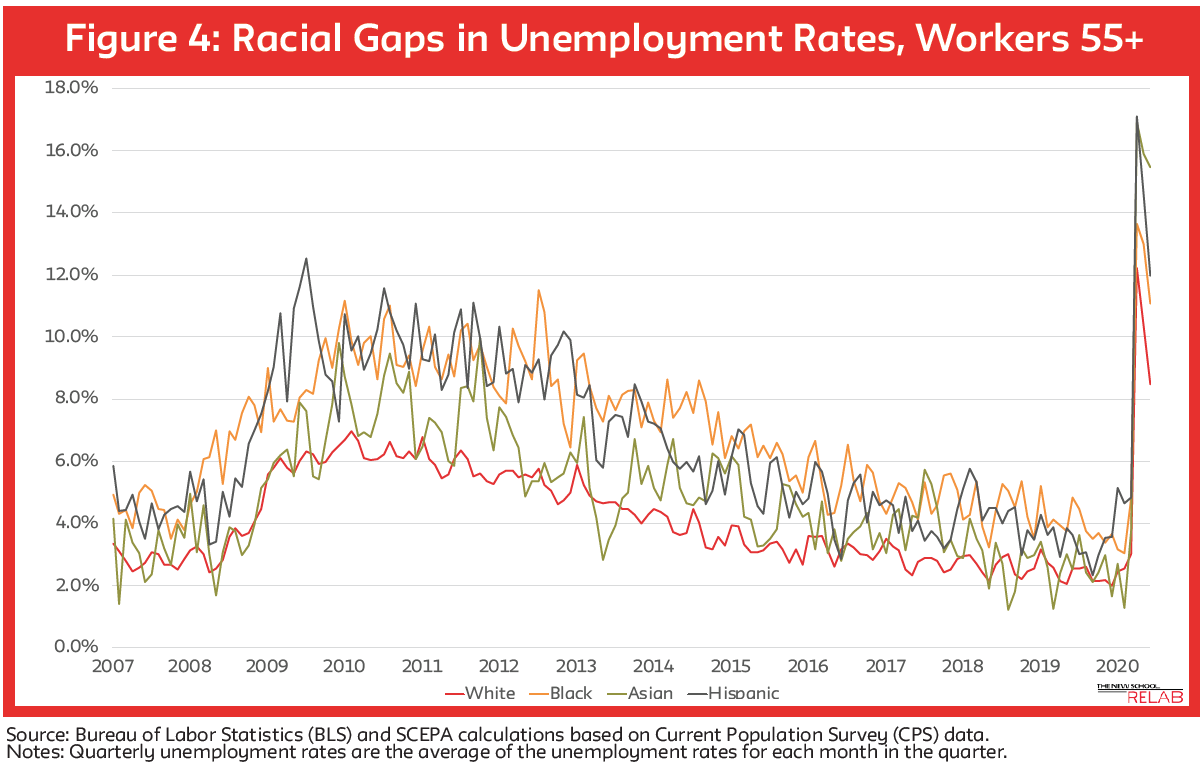 Increase in Downward Mobility in COVID-19

The COVID-19 recession will force 3.1 million older workers and their spouses into de facto poverty when they retire, which represents a 4 percentage point increase in near retirees expected to experience de facto poverty in retirement.15  The recession affects all 67 million people in near-retirement households by decreasing their financial preparedness for retirement, measured by the share of pre-retirement earnings replaced with retirement income. While a replacement rate of around 70% is recommended,16 the median replacement rate for older workers will drop 7 to 9 percentage points (from 55% to 48% if they retire at age 62, or from 69% to 60% if they retire at 65).17 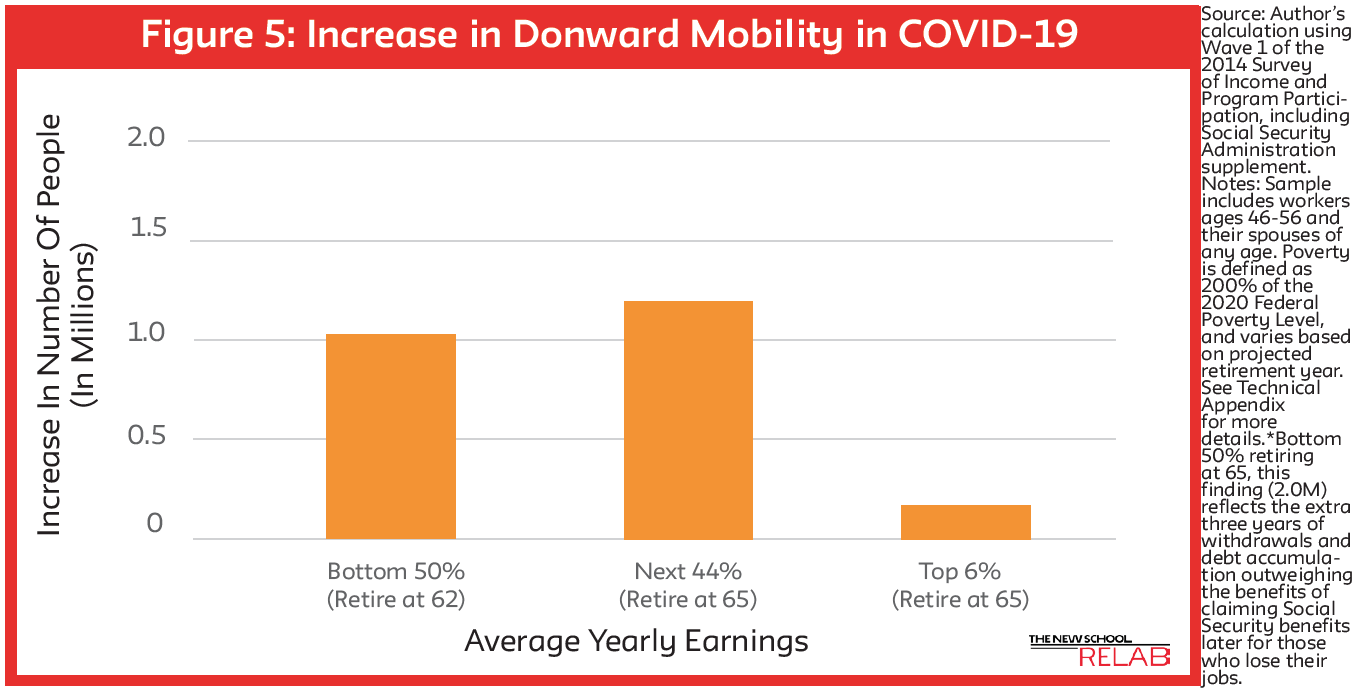 1. Munnell (2020) tracks labor force status for workers in a panel between April 2019 to April 2020 and finds a spike in retirements due to the pandemic. Furthermore, she speculates the prior trend of increasing ages of retirement would continue once the pandemic ends. See Munnell, A.H. (2020). Will COVID-19 force older workers to retire? Marketwatch. Retrieved from https://www.marketwatch.com/story/will-covid-19-force-older-workers-to-retire-2020-07-08?mod=alicia-h-munnell

6. Johnson, R.W. & Butrica, B.A. (2012). Age disparities in unemployment and reemployment during the Great Recession and recovery. Urban Institute Brief No. 2012-3. Retrieved from https://inequality.stanford.edu/sites/default/files/media/_media/working_papers/Johnson_Butrica_age-disparities.pdf

9. Federal Reserve Bank of Dallas (2020). Working from home during a pandemic: It’s not for everyone. Retrieved from https://www.dallasfed.org/research/economics/2020/0407

12. Berger, S. (2020). 3 in 10 Americans withdrew money from retirement savings amid the coronavirus pandemic – and the majority spent it on groceries. Magnify Money. Retrieved from https://www.magnifymoney.com/blog/news/early-withdrawal-coronavirus/

15. Our poverty thresholds are twice the Federal Poverty Line ($25,520 for individuals and $34,480 for couples). Our thresholds are slightly lower than The Elder Economic Security Standard™ Index (Elder Index) threshold for elderly with good health. See Center for Social and Demographic Research on Aging (2017).

17. Low earners are more likely to claim benefits at 62, while middle and high earners typically postpone retirement and claim Social Scurity benefits at age 65 or older. While workers can increase their retirement income by claiming at older ages, many low earners—who are less likely to find adequate employment and have little savings—cannot afford to postpone claiming. In the  COVID-19 recession, even more workers who lose their jobs will claim their Social Security benefits at 62. However, we do not include the possible change in claim age nor the earnings gradient in our model. See Ghilarducci and Webb (2018) for how retirement ages vary by class.

This study tracks respondents in the panel using the Current Population Survey for March and June 2020. The March survey was conducted the week of March 9-13, which precedes most but not all state and federal stay-at-home orders and other work-related responses to the pandemic. The sample includes 9,147 respondents, of which 5,873 were ages 18 to 54 in March 2020 (“younger”) and 3,274 were ages 55 to 70 (“older”). In each month, workers are split into one of three labor force classifications: employed, unemployed, and out of the labor force. CPS sample weights – specifically those for the outgoing rotation group in June – are used for all figures in this report.