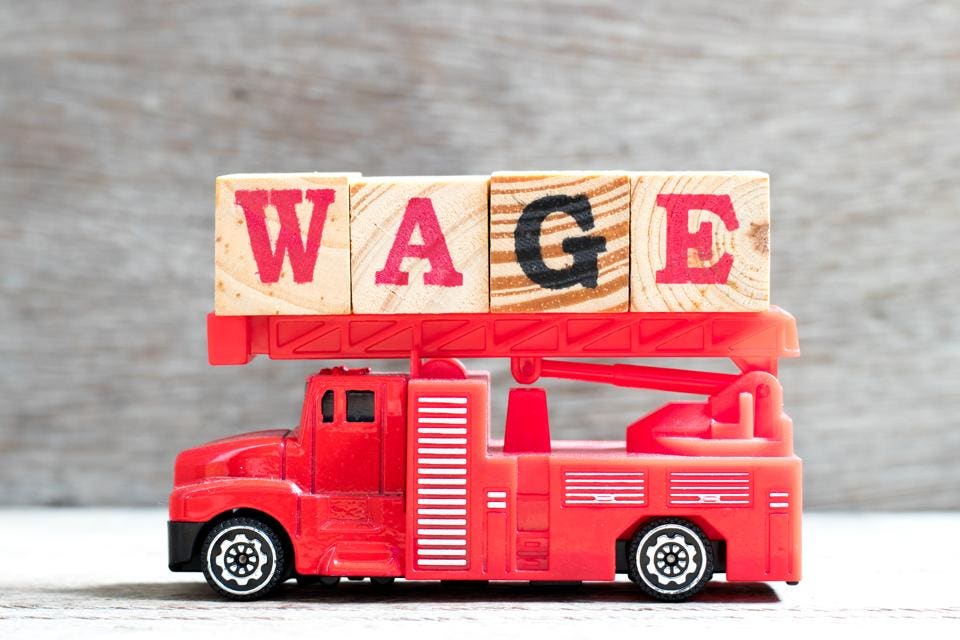 Pay for the American worker is finally increasing, but slowly. Economists are zeroing in on why pay growth is so sluggish. In December 2018, average weekly pay grew to $948.06, up from around $750 in the first three months of 2009. But adjusted for inflation, the rate of increase is small – average weekly pay grew less than 1% per year for the decade.

Wage growth is not only small but highly uneven. The big news from the Financial Times today is that the pay of the average bank employee rose 3% last year;,but the chief executives of the top six American banks rose much faster. For example, Morgan Stanley’s head got a 7% raise while his employees’ average pay fell by 2%. Why don’t the bank employees bargain for higher wages? What are American workers afraid of? What keeps wages low?

When Employers Get Bigger, Wages Get Smaller: A Primer on Monopsony

Economists are offering up a theory called “monopsony” to explain low pay. Not an everyday word, monopsony – "monopoly" is similar and much more familiar. Monopsony refers to a single (big) buyer of labor; monopoly represents the power of a single seller. In monopsony markets, employers are supersized or make themselves the one and only employer relevant for their workers. As such, they can keep wage growth down. Think mining towns: When there’s only one big employer around (and no union to counterbalance them), they can hold wages below the “natural” level. Just as monopolies can keep prices too high, monopsonies keep wages too low.

The theory of monopsony is old, but its renaissance is new. The last Council of Economics Report from the Obama Administration introduced monopsony as a major force suppressing wages to a larger community outside of academics. Using new data and methods, Temple University and University of Minnesota research found out what happens when a small number of employers come to dominate a local industry: paychecks get smaller. This is exactly what monopsony predicts. In the authors’ words: “higher labor-market concentration substantially reduces wages.” Owen Davis from The New School summarizes the study, which finds a significant jump in local employer concentration, all else equal, can lead to a decrease in wages of at least 15% and a decrease in employer-provided health insurance. Small businesses combining forces is one tool in the tool-box of a potential monopsonist.

Employers gain power over worker pay when they begin to dominate the locality. Employers also gain power over workers with an employee contract called noncompetes. New research out of Universities of Maryland and Michigan reveal what most readers already know: that workers of high and low pay, high and low skill, sign noncompetes. What's more, many workers think they are enforceable even though many states won’t enforce them. I was stunned at the prevalence of noncompetes. Nearly 40% of workers had signed at least one noncompete promise. Despite the notion that noncompetes prevent workers from being trained by one employer and taking the skill elsewhere – which most economists believe to be a fair use – noncompetes are common in low-skill, low-paying jobs.

The suspicious use of noncompetes as a pure power play came to light when the fast food joint Jimmy Johns was discovered to have forced their sandwich makers to promise not to go to another fast food restaurant. It is not credible that they were taking JJ secrets to McDonalds. But the action froze JJ workers in searching for a better job. Surprisingly, the courts said it was legal, but JJ settled and stopped using them.

Bottom line: Noncompetes scare workers into inaction, which means not looking for a higher wage as well as turning down better job opportunities at competitors and not asking their boss for a counter offer when offered a higher wage. Non-competes are another tool in the toolbox of a would-be monopsonist.

Want more technical understanding that is clear and wonky? Go to Kate Bahn, economist at the Center for Equitable Growth.

Big companies can dominate consumers. Everyone with cable service knows the frustration of a monopoly. Fewer people understand that big companies can also hold down wages below what they could be when workers do not have countervailing power.