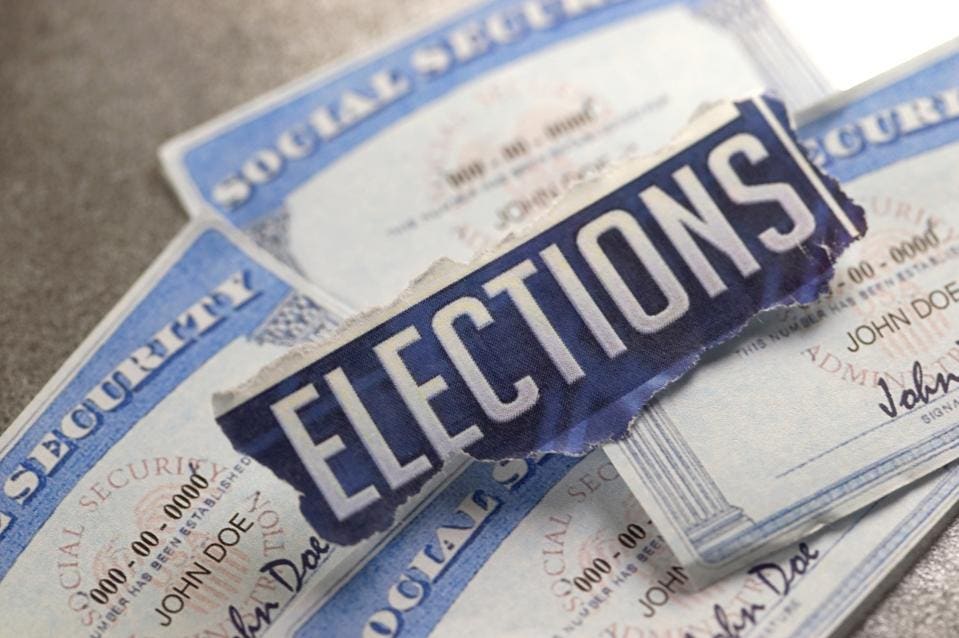 The politics leading up to the midterms are stranger and stranger. Not only is President Trump arguing with leading Republican Paul Ryan, about the Constitution, but the highest-ranking Republican in the Senate – Senator Mitch McConnell -- has called for cuts to Social Security. That is strange politics because Social Security is the most popular program in America, especially among the voters who are growing the fastest and who vote the most – people over 65.

A poll one week before the election about Republican social and economic policy is a red flag for Republicans. 60% of Americans would prefer to reverse the Republican 2017 tax cuts than cut spending on Social Security, Medicare and Medicaid. This poll was taken a week after Senator McConnell said the Republicans would defend the tax cuts and cut Social Security, Medicare and Medicaid in order to curb the growing deficit, caused in significant part by those very tax cuts.

Historian Arthur Schlesinger (page 311) notes that the Republicans echoed corporate opposition to Social Security. A representative of the Illinois manufacturers testified that if Social Security was passed it would undermine America by “destroying initiative, discouraging thrift, and stifling individual responsibility.” In 1935, Republican congressman John Taber said Social Security “is designed to prevent business recovery, to enslave workers, and to prevent any possibility of the employers providing work for the people.”

In the 1970s the conservative Cato Institute made shrinking Social Security through privatization its primary objective and in 2005 George W. Bush tried to replace Social Security with private investment accounts. The Bush privatization plan failed. Though Republicans supported it, no Democrat in Congress would agree and the balance was such the Republicans had to convince at least one Senator to switch sides.

When Medicare was first being considered Senate Republican Robert Dole (then in the House) voted against it. Also in opposition to Medicare, in a famous 1964 speech, Ronald Reagan explained that his opposition to Social Security and Medicare is why he switched from the Democratic Party to the Republican Party. He called Social Security “welfare” and said of the possible regret in not stopping the passage of Medicare: “One of these days you and I are going to spend our sunset years telling our children and our children’s children what it once was like in America when men were free.”

When Vice President Mike Pence was in Congress he opposed passage of Medicare's Part D, the drug benefit, and complained that Bush's proposal to partially privatize Social Security was not enough; Pence proposed deeper cuts to the Social Security program than President Bush.

It seems Senator McConnell, usually careful not to rock the boat before the upcoming midterm elections, did not set out to tell the electorate that Social Security, Medicare and Medicaid cuts were high on the Republican agenda. It appeared to be a slip as he was caught off guard defending the Republican tax cut against a mid-October U.S. Department of the Treasury report attributing the highest deficit in six years to the Republican 2017 “Tax Cuts and Jobs Act.”

Just to be clear, the Republican tax cuts of 2017 are driving the deficit.  Spending more than revenue causes a deficit. But Social Security is required by law to pay benefits only from its revenue and trust funds.  Social Security is one of the few government programs with built-in fiscal discipline.

Bottom Line: Though Senator McConnell may not have meant to publicize the Republican agenda to cut Social Security, Medicare and Medicaid, the long history of Republican opposition may be an example of what Sigmund Freud and modern psychologists believe--a slip of the tongue may reveal more of the truth than a well-constructed prepared remark.  And in order to defend their expensive and regressive tax cut, Republicans may be preparing to cut America's most popular programs.